All the bloggers are marketers in their own way, they might not be promoting a product or service, but marketing legend Frederick Winslow Taylor said “it pretty clearly, that marketing is not all about selling products, promotion of pitching of anything or anyone to fulfill a purpose (Not necessarily Monetary) is marketing” So whether you are pitching an idea, phenomenon, person, a subject, a niche, or anything that you express to your readers to get some money or recognition is marketing.

And marketers always play with creativity and words. When you have the potential audience out there, all you need to do is make them come to you. The best way for bloggers to attract a maximum audience is via an effective Title or heading.

To make that happen there is no proven theories or universal formulas, it is all about knowing your audience and delivering the needful according to the current trend. So, there are just guidelines that might help you deliver the best of your content. These guidelines are also momentary and varied from person to person and audience to audience.

The mind is the most fluctuating thing ever known to the human race and there is nothing that can say whether each and every human being will follow the same pattern or not. So all you can do is rely on your research and instincts. But there are few theories and tools that can help you to make the most out of your head and turn a phrase into a well hit Title.

First let’s look into some studies and research, let us understand which kind of titles generally hit maximum audience no matter which niche you are focusing.

Words to keep while drafting a title for your blog 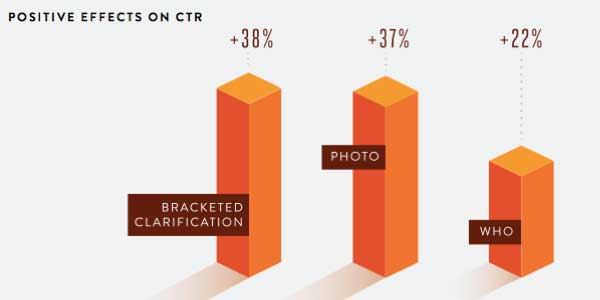 Let us understand how it works, the first result is not the actual way, but a form of drafting the title,

It was observed that the words that clarified the form or the nature of the blog or file got 37% more clicks than that of the titles that didn’t have them.

For example, you are running a vlog and each article which contain video tutorials or displays and you clarify it in a bracket like TITLE (Video) is supposed to get more clicks than that of the one which doesn’t clarify. So event blogger and vloggers, keep this in mind.

It is crystal clear to all the marketers that information, when clubbed with graphics, provides better clicks and appreciation than that of the one that does not have it. So, use the word photo, in the title somewhere and you are likely to get 37% more clicks than that of the title that doesn’t.

This is more applicable to the people who are blogging in entertainment sector, try to enter the word who instead of why in your titles, it is proven it gives 22% more clicks than that of the title that doesn’t. Well, it can because of people are more interested in who than that of why or because of the high rank because of search query match. But the results are verified.

After this, let’s understand as to which words should not be used in drafting a title.

1. Words to avoid while drafting a title for your blog 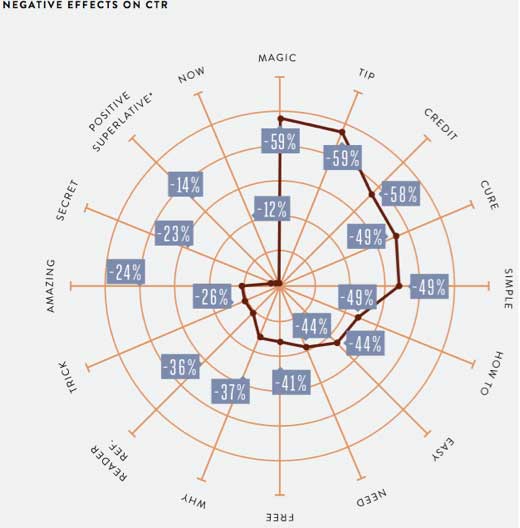 I know the list is too long but let us understand the group of words and try to elaborate why they got negative impact on CTR:

Readers, as well as the search engine nowadays, have become too savvy to fall for lucrative words which mostly leads to some sort of affiliate link or some sort of spam. Even when you are sometimes using it on genuine purpose, people think of it as a fraud and avoid to click on such links, so don’t remain orthodox and try to innovate the titles.

You can understand that people now practically lives online and are also experienced enough to avoid such titles that might lead them to some trouble or unwanted schemes and scams. So be genuine and also try to avoid such words in your title, as you might find some traffic but if you are targeting for some high-quality readers and traffic, it is advised not to use them.

There are also some other words like how to, credit, easy and other such words which got less clicks may be because of the following reasons:

So, they are on this list mostly because of the lack of innovation and some are on the list because of the Search engine algorithms. So it is advised to do the needful and try to stand out of the herd.

Now as I know my fellow bloggers, many of you might argue that you have not used such things in your blogs or used some of the words that got less clicks as per the research and still got a good response to your blog, well as I said there is no such formula to make a perfect title. Even the Title made for this article doesn’t have such words and still you clicked on it. So let’s jump to some long-term tools and factors. It is rightly said that there is no right way to do the marketing, especially in content marketing. It fully depends upon your mind and of your targeted audience. But if you go thoroughly, the article does say few things that can never fail to deliver the best.

3. There are three things that a blogger must rely on before making a title for their blog, they are

These three things when used individually or in combination, can never fail to deliver an eye catchy title. So let us understand all three of them in detail and what things you need to keep in mind while using them:

Creation means to create a title that is not as per some method or order, create something unique that is not a trend of the market. Create a title that will make you stand out of the herd. No matter what time you are in, creativity never disappoint. People always like to read something that is not a regular gig and still connects to them. So no matter which niche of blogging you are doing, a good title with a some spiced up creativity will always make a great dish for your readers. Try keeping it simple though, as you are not only attracting readers but also the search engine algorithm. If the algorithm doesn’t understand where to put your article, it will create an issue for you in terms of ranking.

Innovation is another way to give your blog title a twist it needs, try combining few things and try introducing new things it will lead you to some good exposure in one way or others. Be the one who sets the trend as the humanity is a witness that no matter what, trendsetters are always better than trend followers. So be the trend setter and rely on innovation and improvisation because change is the only constant.

The last but definitely not the least tool to use is the hard hitting facts, Give people what they need when they need. No clingy attempts of attraction, as it is always said it is not all about how you impress, but it is more important that how you express! So it is said that keep it pretty simple especially when you are dealing with the kind of readers who possess great knowledge about the subject and are interested only in straightforward points and facts. There is a reason people say “Facts hit harder than Fiction.” So if you are a technical blogger, quit using the Cinderella style words, instead switch to the facts and hardcore information. The only argument I have received to this is ranking in the Search engine, so bloggers, it is not always about getting clicks from tacky titles and there are thousand other SEO tricks that can help you get the ranking. But even when you have the first rank and still the people who are willing to search on the internet doesn’t find your title quality good enough, they won’t click. So it is advised to keep it real and Fact driven.

This three tools can help you achieve good results but it totally depends upon what to use and where to use. All the tools are useful but it also depends upon which niche you are marketing as well as the targeted audience of your blog. So that is it and don’t forget to comment your views regarding these theories and facts mentioned above.